How did we get here?

What is our philosophy?

Find out the answers to these questions and more here....... 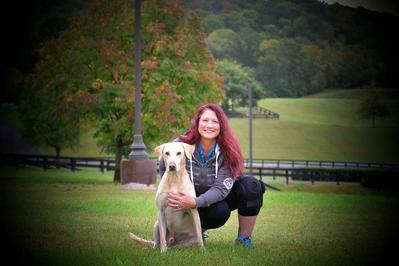 ​Hi, my name is Kim Johnson, the founder of Lone Star Diabetic Alert Dogs.  I am a wife, mother, grandmother oh yea, I am also a type 1 brittle diabetic.  A couple of months prior to my diagnosis, I told my husband that something was very wrong with me.  I could not give him any symptoms or tell him why I felt that way, it was just a strange feeling.  I went to a new doctor to be checked out and was actually told that I was just fine and may want to seek out a therapist!!!  (Note, he had not even received all my lab work back yet) Three weeks later I was having difficulty with my eyesight.  I made and appointment for an eye exam later that month.  We had a vacation planned and I was not about to let anything stop me.

The morning of our flight out I told my husband I really could not see very well but again, I was not missing that vacation.  By the time I got off the plane, my eyesight was about zero.  I called the closest eye doctor and went right in.  On the way, my husband commented that I had been drinking a ton of water lately.  I always carry water with me so I did not think much of it.  He then mentioned that I looked like I lost some weight.  I had but I just blamed it on stress and blew it off.  At the eye doctor, they said I was severely nearsighted but they could not see a reason for it and they asked me to come back the next day to see a specialist.  The specialist thought I had sjogren's disease which presents just like diabetes and referred me to my rheumatologist back home.  Meanwhile, he gave me some glasses and said they may work only hours, days or I may wake up the next day and not need them at all.  I did not care as long as it could hopefully get me through the vacation.  As the trip went on I was having trouble eating anything, my thirst was getting worse and I felt weak.  By the time we landed back home I could barely move I was so weak.  I agreed to go to the hospital the next day.

At the ER, they took all kinds of tests from an MRI, CT scan, blood workup and physical.  The doctor came in and said everything looked fine so they were going to let me go home but they were waiting on one test to come back.  I had no idea what the one test was but we waited.  He came back in and told me I was being admitted to the critical care unit with high blood sugar.  I thought that cannot be true, there must be a mistake.  You see, I am the health nut of the family, I am known as the "food-natzi", I do not eat many sweets or even allow them in the house!  I eat right, exercise, do not smoke, etc....  It then took three days before I was actually told I was a diabetic and another two before I found out I was an adult onset type 1.  My family and I were in complete shock.  The nutritionist came in and when I told her how I eat she said I already do everything as I should.  The diabetic counselor came in and it was her that explained that I was a brittle diabetic.  They had monitored me and many times I had gone down to a 30 bg and had no idea.  No sweating, hunger, shakes, nothing.  She explained that was the most dangerous type of diabetes and she suggested I consider a diabetic alert dog. I had no idea that they even existed or anything about them but I got on my laptop and I was on a mission.

Over the next few weeks I would learn not only the cause of my adult onset diabetes but that I also had several other diseases to contend with.  Come to find out I have a rare genetic disorder that caused the Diabetes, Addison's Disease, Thyroid disease, Hashimoto's Disease, Hypertension, Ankylosing Spondyl Arthritis, MEN Syndrome and PGA III and IV, Saltzman's Disease,  Spondylosis and Degenerative Disc Disease - all came on within days of each other.  Not fun but all manageable and it could always be worse!

Back in the hospital, I spent days researching and quickly realized there was no way I could afford a $25,000 diabetic alert dog and although I had years of dog training and my husband is a veterinarian, I could not see training one because I needed one NOW.  I am outgoing, independent, busy and I knew I could not survive having any of my independence taken away. I came across a classified ad that had been posted the night before.  It simply stated that if I was looking for less costly way of having a DAD, to email and I did.  Two days later a man called me back.  He explained that he had a DAD and he needed to find it a new home.  He had a pregnant wife and did not have the "time or money" for the dog.  He gave me the number to the person that trained him and suggested I contact her with questions.  I immediately called her and she told me about herself, the dog and suggested that she go get the dog to check him out and see if there were any "holes" in the dog and that if all was well I could pick him up at the end of the month.  I agreed and we kept in touch.  The photos that were sent to me showed a sad dog, underweight and he looked miserable.  The trainer told me other than being underweight, he was still working and to come and get him!

I hopped on the plane with excitement and nervousness.  Here I was flying across the country to get a dog and spend a few days with a trainer I had never met.  They were waiting for me and it was love at first sight.  The trainer handed me his leash and said here you go!  Over the next few days I learned about my dog, what training I needed to do, how he was trained and so much more.  I knew then that I wanted to train these amazing animals for others to be as fortunate as I was to find an AFFORDABLE life saver.  We went home and he immediately was doing his job.  The second day home he woke me in the middle of the night when I had a very low BS.  I am not sure I would have awakened the next morning without him.

Over the next few months my service dog and I really got to know each other and began agility and rally training as I believe I should give back to my dog something he enjoys as he must work for me 24/7.

My husband has always been my biggest fan so when I told him that I believe the reason I was given diabetes is to help others by training diabetic alert dogs, he was 100% on board with the plan.  It would be a labor of love for both of us and as we both have always given back to our community this was a way to do something even bigger. I knew with my health issues I could not do this myself but I could at least get things rolling and so I did.

On a side note, a few years back, my DAD was alerting me to a low.  I checked and my meter told me I was over 480 (I have never been that high) I checked again with the same result.  My DAD continued to alert a low so, trusting my dog, I got another meter and sure enough I was LOW!  Had I trusted my meter I may have died of an insulin overdose! I took the recently purchased meter and strips to the pharmacy and sure enough, they did a massive RECALL the following week!~ NOTE: ALWAYS trust your DAD!!